There Will Be Blood...and Dalmations

I saw There Will Be Blood over the weekend and I was talking to Lis, the Creative Director here at Artgig, about it during our morning update. We both agree that Daniel Day Lewis knocked it out of the park with his performance of Daniel Plainview, a very real and very flawed oil man at the turn of the century. Another strong performance was that of Paul Dano as Eli (and Paul) Sunday. Who is Paul Dano you ask? He also played the silent older brother in Little Miss Sunshine and I had no idea it was him while I was watching TWBB. Performances aside, we both agree the single most important scene in the entire film was a little bit of very real-looking home movie footage of Plainview's son, H.W., and the girl he would one day marry, Mary Sunday, just running about and playing as kids do. Daniel Plainview also appears in this sequence and he is so obviously happy - you can feel how much he loves his son. It was just so natural and it made me believe everything else about the film. 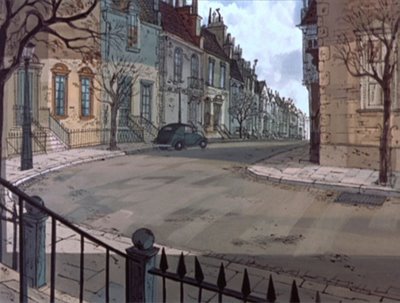 Last night I came home to my son and his cousin watching "Meet The Robinson's" which I watched for about 45 minutes and I still can't make any sense out of it - typical plastic CGI animation and I can't stand it. Then, we watched the 1961 Disney classic, 101 Dalmations. I didn't remember the film from my childhood but I have to say it was a breath of fresh air after the Robinson's. I'm not talking so much about the story - I still can't believe that Cruella de Vil actually intends to skin puppies to make a coat - fun for the whole family! But the artwork is absolutely fantastic and I love the style, from the line quality in the characters to the color and detail in the London backgrounds - it all adds up to great looking animation. I looked it up on IMDB and it turns out, this movie was the first Disney film to use automated xerox inking technology (replacing inking by hand) to cut down on production costs after the financial failure of Sleeping Beauty. That probably explains why I like the look so much - it's not as "clean" as most Disney films. In case you were wondering, Arsenal tied Wigan over the weekend, 0-0. And for those of you keeping score, that gives Man U a one point advantage if they keep winning. Frustrating doesn't even begin to sum it up.