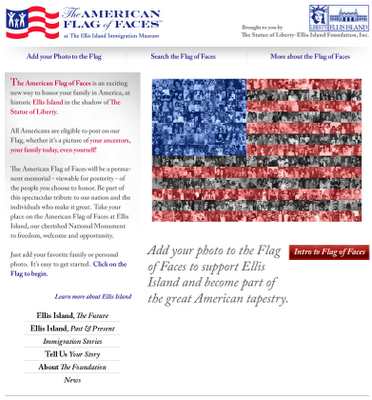 We're very pleased to be a part of the new American Flag of Faces website, produced by Artgig and ESI Design for the Statue of Liberty-Ellis Island Foundation, Inc.

From the official release:

"This interactive website invites all Americans to submit photos of their families, their ancestors, even themselves to become a part of this living, ever-changing American mosaic.

Participants can upload digital photos at www.FlagOfFaces.org with a tax-deductible donation of $50 to become part of the American Flag of Faces™. This dynamic website, created and produced by ESI Design and Artgig Studio, opens with an animated red, white and blue flag populated with user-submitted images. Each image can be clicked on and enlarged. Users can also search by name to call up specific individual or family photos.

The American Flag of Faces™ will also become a central exhibit in the upcoming Peopling of America® Center, an exciting new expansion of the Ellis Island Immigration Museum. The Flag of Faces exhibit will consist of a large video installation providing a mosaic of all the portraits submitted by individuals and families who have made America their home throughout the generations."

Now a peek under the hood:

Constructed as a hybrid Flash/HTML website, flagoffaces.org opens with a waving flag of faces created in Actionscript which utilizes the Papervision 3D library to recreate realistic motion.

From the homepage, visitors are encouraged to add an image to the flag along with a donation. The image upload interface was built using an Ajax library which enables users to perform basic edits such as cropping, rotating, red eye reduction and contrast adjustments prior to submitting their photo.

The Flag of Faces itself is a Flash module that taps into a Microsoft SQL database to dynamically generate the flag and apply red, white and blue color overlays to the individual user submitted images.

The result is an American flag that is a virtual mosaic of individual user-generated portraits.