So, what did you do this weekend?

I hope all you dads got the Father's Day free pass to celebrate being such a great dad.

I sat down with my Brother-in-Law and some chips and beer to watch Portugal roll over the Netherlands in the Euro Cup.

And speaking of rolling, Apple extended our New and Noteworthy run for another week so Marble Math and our Alien Buddies are hanging with some pretty impressive company on the Education Top 20 charts.

Ever hear of Toca Boca?

If you have an iPad and a child under the age of five, I think you know what I'm talking about.

Our Alien Buddies are over at Toca's House with Dora right now - probably in the Kitchen, playing Bingo (sorry, could not find a good way to get Solar Walk in there). 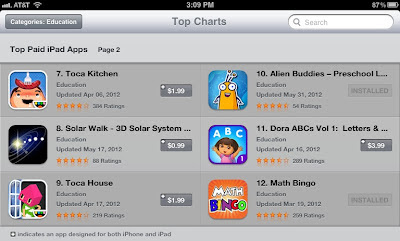 And that's not all.

Have you seen Marble Math Junior?

We think they'll actually enjoy solving math problems while dodging obstacles like sticky green slime and boxing gloves that spring out of maze walls when you least expect it.

And they'll probably get a kick out of earning cool new marbles as they gain points.

And you can totally customize the problem types to make a perfect educational app fit for your young learners!

Who knew math could be this much fun?