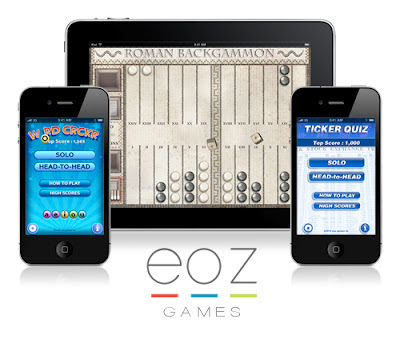 In the wild west of app development, it helps to partner up with a developer who’s no stranger to danger. And believe me, we’ve seen our share - as a soup to nuts indie developer, and as a hired gun.We first met new game company, eoz games, right around the holidays, when they were just a bunch of sketches on index cards.Today, we’ve developed and published two eoz games, Ticker Quiz and Word Cracker, for the App Store and another, Roman Backgammon, is in beta testing with Apple submission just around the bend.It’s no easy task, launching a game company virtually overnight. We pushed and pulled and cursed and toiled, to get the specs and design just right. And once the dust (mostly) settled, we’ve got three polished apps - cocked and ready to download. They’ve filled out a bit since we first met, but in reality, these three games haven’t strayed far from their humble 3 x 5 beginnings. The trio might be bigger and shinier now, but the beauty and simplicity of the original game concepts remains intact.App #1 is called Ticker Quiz - it’s a handy pocket game for those itching to test their stock symbol know-how. The game can be played two ways: by company name, or by ticker. The timed game can be played solo or in head-to-head mode and the top scores appear on the Game Center leader boards.App #2 is called Word Cracker - if you’re daring enough to call yourself a wordsmith, you better be willing to lay it on the table and prove it with this app. The timed game is played two ways: with or without spaces (think hangman) and also offers solo and head-to-head play modes. Like Ticker Quiz, top scores appear on the Game Center leaderboards.App #3, Roman Backgammon, is my personal favorite of the bunch. Addicting and challenging, this app takes the classic Backgammon game and adds a historical twist with slightly different rules and a custom game board and dice design to take you back in time. Once you’ve beaten the crafty AI a few times, you may think you’re ready for a high noon duel with a dice-slinger from another far off town, and the Game Center integration will bring the challenger to you - just pick a stranger and pit your wits.Together, this app trio represent some of the finest games you’ll play this side of Dodge City.