Who is Seu Jorge? 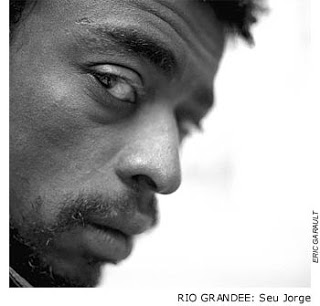 Going to a Central Park Summerstage concert in a couple of weeks for a nice line-up featuring some fine euro-latin talent - Thievery Corporation is the headliner, along with Bebel Gilberto, Federico Aubele and Seu Jorge.

I know the others, but who is this Seu Jorge? I ask.

Raised in the slums of Brazil, he played "Knockout Ned" in the fantastic "City of God."

City of God too violent for you? Perhaps an offbeat comedy is more your taste - he was also in Wes Anderson's "The Life Aquatic" where he became pals with Bill Murray and Willem Dafoe.

Oh, and he also did a bunch of Bowie covers for the soundtrack - in Portuguese.

Including the "Aquatic Sessions," he's released four solo albums and he tours the world.

And if that's not enough, Vogue Brazil once dubbed him "the coolest man on the planet."