The short week is a killer. Had a really perfect Memorial Day weekend but I've been digging out ever since. And now there's some kind of a miniature parade marching past on the street below... I'm determined to post something  this week and maybe I'll find some time over the weekend but for now, I'll just drop a few clues as to what we're up to here at Artgig: Or rather, what Simon Fisk is up to over at Plunge Records.  I just got an email from him announcing a two night CD Release party for "Vague Hotels," June 13 & 14. He's also planning a live HD video streaming event for both shows - you can catch it at Plunge TV on the Plunge website. Simon's always got something cooking and he's a real innovator, looking to make a real rich media label out of Plunge. I also dig the art - most of it comes from the talented Kimberly Wieting @ Gritt Media. Speaking of innovators, we're talking to some folks now about building mobisites - web video delivery for mobile devices.  Funny, back when were all at Sunburst Technology, big, bad Vivendi-Universal came in and scooped us up and they had a vision for the future - everything on your cell phone.  That was like seven or eight years ago and we all thought it was just crazy french talk. Today, the world of mobile video is still the wild west but it's undeniable - it's coming, just a matter of finding the sweet mix of technology and standards and it's right around the corner. Here in the US, we're a little behind the technology because we've all got home computers. In emerging countries, they've skipped the computers and gone right for the phones. The phone is the computer. All I want to know is where's my 3G iPhone? Here comes the band again and they've got bagpipes... I'm outta here. 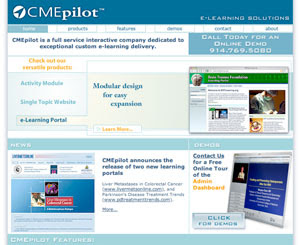 Just launched the redesign of our very own CMEpilot website.

CMEpilot is a division of Artgig that is dedicated to custom e-learning delivery of Continuing Medical Education content.

The redesign spotlights the products we've developed over the years: Activity Module, Single Topic Website, and the full-featured e-Learning Portal, to provide a solution for most CME programs. And because we're a custom shop at heart, we can always build it if you don't see it offered.

We've even included a new "Games" category featuring "Bug Assassin" for those interested in something a little, dare I say...fun. 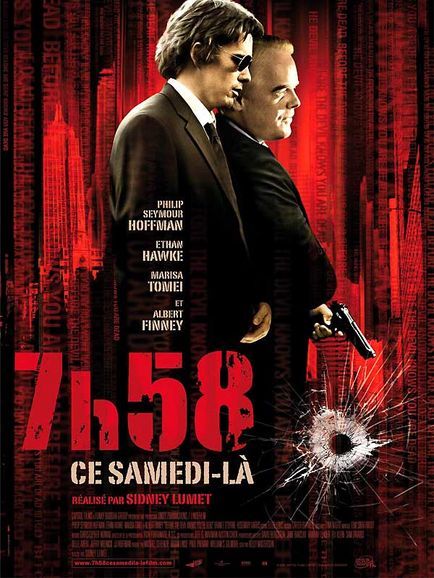 Just finished watching "Before the Devil Knows Your Dead," a solid New York melodrama by a man who knows the territory, director Sidney Lumet. It's a heavyweight film about a pair of desperate brothers (Philip Seymour Hoffman and Ethan Hawke) who hatch an ill-fated plan to knock off their parents Westchester jewelery store. I knew it was Westchester before they said it - the locations were spot on. I did some reading after the film and found that they shot the White Plains Hospital as one location. Another "Westchester" location was actually a Bayside, Queens strip mall.Fooled me.

The "realness" of "Before the Devil Knows Your Dead" got me thinking about "Gone Baby Gone," a solid offering from the brothers Affleck (Ben directing, Casey acting) about a local PI hunting for a kidnapped little girl in the back alleys and dive bars of Boston. This is another film that feels like it nails the real grit of real life. Interestingly, one of the stand-outs in the cast, Amy Ryan, who plays the beyond irresponsible mother of the missing girl, also played Phillip Seymour Hoffman's wife in "Before the Devil Knows Your Dead."